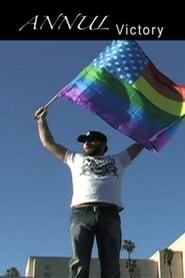 Annul Victory is a documentary on the fight for marriage equality and the Proposition 8 election battle. The film documents the roller coaster ride of emotions in California after the historical state Supreme Court decision in May of 2008, finding it unconstitutional to deny gays and lesbians the right to be married in the state, and then the passage of Proposition 8 in November, denying gays and lesbians marriage rights, and “annulling” thousands of marriages. The story is told through the life and experiences of Robin Tyler and Diane Olson, one of the 14 couples involved in the historic litigation, with a look at some of the 18,000 couples who got married during the window of “legality” between May and November, with thought and commentary provided by a host of celebrities.
Original title Annul Victory